By Noel T Braymer
Through Spring of this year due to the outbreak of the COVID-19 virus, ridership on intercity trains everywhere has all but ended. I continued to ride trains this Spring, although not as often as in the past. During this Spring I rode Metrolink, Amtrak Pacific Surfliners and Coaster trains. This covered trips to Los Angeles on Metrolink and Amtrak as well as trips to San Diego on the Coaster. What these trips all had in common were plenty of empty seats. As we see some progress in reducing the spread of COVID-19, rail ridership is far from recovering. If we want rail passenger service, we need to ride it. We also need to market it to bring more passengers to the trains. The following is a report of the status of rail passenger service in Southern California. Providing a sanitary ride with masks to prevent the spread of viruses is needed to ensure the reduction of infection when riding the train. This has been fairly successful at major stores that have been allowed to stay open this Spring

The start of the crackdown for stopping the COVID-19 virus goes back to April of this year. I took a weekend Metrolink Pass from Oceanside to Los Angeles one Saturday. Even by April almost no one was traveling by rail. I even was prevented from transferring to transit services at Los Angeles because of restrictions to avoid spreading the Corona Virus. Soon thereafter ridership crashed on most transit ridership in California and most of the rest of the country.  Lack of connections and frequent passenger services derailed ridership since then to this day. The heart of transportation lies in connections to as many travel markets as possible. A major station like Los Angeles Union Station is an example of this as a major hub for connections to multiple travel markets.

This June I took a quick trip to Los Angeles Union Station from Oceanside on Amtrak. The advantage of this was the Surfliner’s greater frequencies compared with  the more limited Metrolink services. I mostly wanted a quick trip to Los Angeles and back to Oceanside.While ridership wasn’t great. From the passenger cars I did go through about half of the seats on these cars were occupied. What was noticeable was the train was ahead of schedule for the entire trip. Basically people were spending less time getting on and off the trains. But the train couldn’t depart until the station’s scheduled departure time. So while we often waited at the stations, we still got to Los Angeles early. Cutting out schedule padding would encourage more ridership. The biggest problem remains how long the services at Union Station remain closed.

Just recently I took the Coaster Train from Oceanside to San Diego and back. Ridership was very low. My return train normally also would be a commuter service from Sorrento Valley (a major job center in San Diego). There was almost no one waiting at the platform to ride home going north during rush hour.

Generally the fight to control the coronavirus has been going well. Much of this came crashing down recently as several States decided to open up more businesses. What happened  next was a major increase of the number of people catching the COVID-19 virus. Many of the people catching and spreading the virus were adults under 30 who had gone out drinking and partying with their friends. Even singing at church can spread the virus since the virus is spread in droplets of water as people talk or sing. We should be able to travel more with proper controls that stop the widespread infection of this virus.

I recently took advantage of a Metrolink Weekend  1 day Pass which I could use on any Metrolink train running on either Saturday or Sunday for $10. In the past I have frequently traveled on Metrolink on the weekends. I know with the current COVID-19 Pandemic, travel is not the same as in the past. Because of COVID-19 most public transportation ridership is way down. I have recently traveled in San Diego County on transit. With ridership down, there is no problem having a 6 foot or greater  “bubble” around you to reduce the possibility of being infected with the corona virus from other passengers. California and much of the rest of the world is now under “Shelter in Place”. Basically to prevent runaway exposure to COVID-19 people are required to avoid being in crowded spaces and instead to spend most of their time at home. On my most recent trip on Metrolink I didn’t have to worry about crowding on the train. The fact is I was largely by myself on my latest trip. 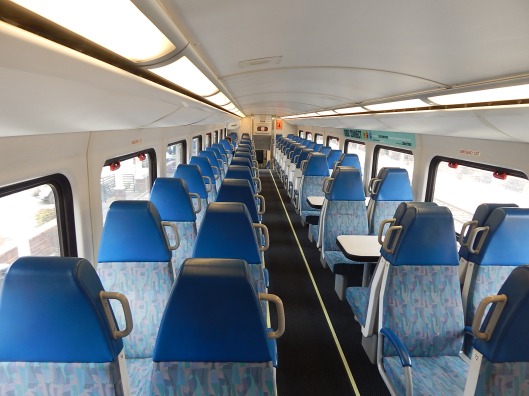 Shot near Fullerton, there are only 2 passengers on the upper level of this car. One is myself taking this picture, The other is a man at the other end of the car you can barely see sitting down. Photo by Noel T. Braymer

When I got off at Union Station many things had changed since my last trip. There were many new barriers largely forcing people to travel in one direction. There were guards at the barriers who smiled when I showed my Metrolink Pass for the day. I soon realized the reason behind these changes was to create one way pedestrian travel to minimize the exposure of the pubic as much as possible from other people who might unknowingly have the COVID-19 Virus. If you have two way travel, you will be facing dozens of people passing by you only a few feet away. But if you travel in one direction you greatly reduce the number of people around you who might have the virus. Walmart and other major stores are also doing something like this with widely separate entrances and exits for one way travel. 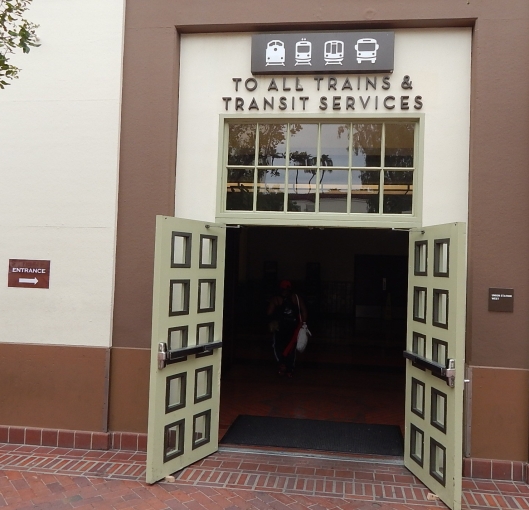 This is the “new” entrance to Los Angeles Union Station. The main entrance next to Alameda Street is closed for now. Photo by Noel T. Braymer

Some of the new barriers now in place at Los Angeles Union Station.Photo by Noel T. Braymer

With the Metrolink Weekend Pass comes access to travel on LA Metro trains and buses. But when I tried to use my pass to enter the turnstile for the subway at Union Station I was stopped by 2 or 3 security guards who demanded to know the nature of my travel. They didn’t have much else to do since very few people were headed for the subway. I just gave up trying to talk with them and walked away. But I wondered if this was the case at other Metro Stations. So I decided to walk a couple of miles to the Flower St./ Pico BLVD Light Rail Station for the trains from Los Angeles to Long Beach and Santa Monica. It is an open air station and there was no sign of any security at this station. I had planned to catch the Santa Monica train there but by this time I figured I would just go back to Union Station and catch the early afternoon train to Oceanside.

The train back to Oceanside departed later than I expected so I waited at the station. There was some confusion over which platform the train was leaving from with the original readout for the Oceanside train departing from a closed platform. We left at 2 PM again with very few people on this train. The conductor yelled at one passenger boarding at Union Station who yelled back at him and ran off refusing to show the conductor his ticket.

These same issues are to be found in much of the rest of the world where there are COVID-19 patients. I recently watched a YouTube video in English from Germany which showed preparations for people “Sheltering in Place”. Just like California some businesses had to shut down,  many people were now either out of work or working at home and more home schooling was in place. Many people are not happy to practice “Social Distancing”. Frankly people like company. One thing in the local news has been efforts to close all the beaches in San Diego County. This is in reaction to the antics of college students during Spring Break in Florida, several of whom later came down with COVID-19. While taking the train home along the Coast in Orange County I saw most of the beaches open to the public. Most of the people at the beach were spread out either  walking along the shore or lying in small groups sun bathing on the sand. One thing about sunbathing is Vitamin D. The body makes Vitamin D when exposed to the Sun. This is very healthy and good for lung health. This helps prevent pneumonia which is what kills most people with a viral disease like COVID-19.  A typical day at the beach isn’t the same as Spring Break in Florida.

The goal of “Social Distancing” is to prevent people becoming sick. But the health of the human immune system varies among people. Two people may have contact with the same ill person. But one of these 2 people might get sick, while the other doesn’t. A healthy immune system is critical for staying healthy.  What has been noticed from the recent deaths of people from COVID-19 is that many victims are middle age or even younger adults. Usually most people think  those most likely to die in an epidemic are “old”, usually over 60. What has been ignored over the last 30 years has been a major increase of obesity and diabetes of the world’s population, with the United States at the top of the list. A healthy nutrient rich diet is central for a healthy immune system. Many of the health issues people have are from the Standard American Diet or SAD. Eating “junk food” which are common in processed foods full of sugar and low in nutrition. This spikes the release of insulin which turns blood sugar (glucose) into fat. High levels of insulin and body fat leads to inflammation which weakens the immune system over time and causes many heath problems, including death.

As for myself I’ve never had a serious illness. Injuries yes, but I usually healed from them quickly. Most of my adult life I’ve tried to exercise and eat healthy. But as an adult I often also ate a SAD diet and couldn’t understand why I kept gaining weight. Over roughly the last 15 years I have lost around 115 pounds and am now wearing the same size clothes I wore when I was a young adult. I still rarely get a cold, let alone the flu.