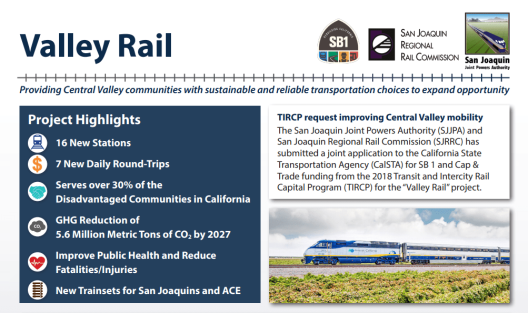 From the Website for the San Joaquin Joint Powers Authority

Today’s San Joaquin’s service between the Oakland Station in the Bay Area and Bakersfield is scheduled to run just over the six-hour threshold. In order to meet labor requirements, a crew change is currently scheduled at Merced. This is a significant expense for the operating budget. Furthermore, the implementation of PTC is estimated to increase the time it takes to swap crews by as much as 15 minutes due to a new set of procedural requirements. The new protocol will add a considerable amount of trip time for passengers. Given the significant cost and schedule implications of continuing to have a crew change in Merced, SJJPA is committed to developing a plan that will eliminate this crew change.

This may be one of the reasons there is planning to run hourly High Speed Rail Shuttle service between Bakersfield and Merced by 2028 or so. Running San Joaquin trains between Madera to Sacramento or from Merced to Oakland can easily be done in under 6 hours.

As part of the 8th and 9th Daily-Round Trips and establishing service along the Sacramento Subdivision, the SJJPA is currently working to implement up to six new stations north of Stockton, including Lodi, Elk Grove, and four in Sacramento. A new station in Oakley is also being planned, as is a new station in Madera. These are contained in the Short-Term Capital Improvement Program. New stations will also be considered as part of any extension of service north of Sacramento. SJJPA is also implementing numerous station enhancement and parking projects to ensure a high-quality passenger experience.

What is already underway with the San Joaquin’s and other rail services in California are “pulse services”. Basically the trains run the same schedule all day long, only the time of the hour changes, but the trains run at the same time by the minute on each hour. This improves on time performance and reduces the amount of double tracking needed to run the trains on time. It also makes it easier to make connections to other trains and connecting bus and rail services at stations. This is how much of the rail passenger service is run in Europe and other parts of the world.

While I was recently checking out the LA Metro Website. I looked up what if any progress was being made for the long overdue Run Through Tracks at Los Angeles Union Station. To my surprise I found quite a bit recently has happened. What I found were the results of planning presented at an industry forum held on January 9, 2020 for the Link Union Station Project. To its credit LA Metro is getting more down to earth in its planning. This is a 2 phase project with Phase A budgeted at $950 million dollars. Throughout this presentation was the understanding that budgets were tight and everything possible needed to be done to stay on budget. One might say this is a scaled down project compared to earlier planning by LA Metro. Phase A comes in 3 segments which are funded. Phase B which is segment 4 is still  not funded yet.

This forum was rather recent and there where quit a few informative graphics included that were presented at this meeting, 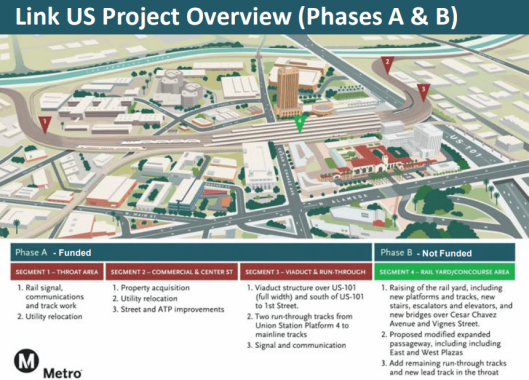 This shows the latest planning on creating run through service at LA Union Station. This won’t be finished overnight. Basically lack of funding is holding back construction. What is being planned is to start with one platform serving 2 through tracks to begin. Along the way other long postponed improvements will also be built in the coming years. 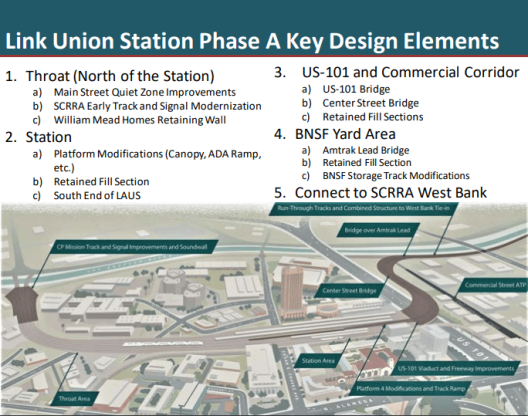 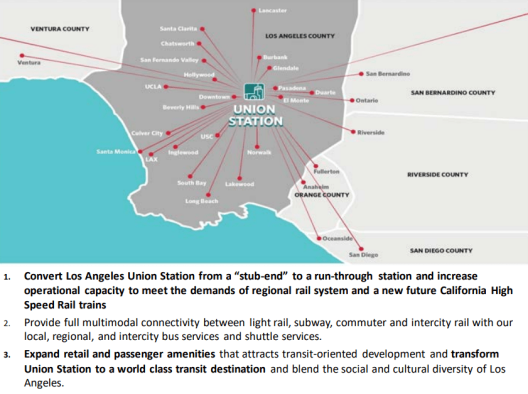 More from the LA Metro presentation of January 9, 2020

This is the current budget and the sources of revenue for the LA Union Station run through tracks.

Just some of the headaches of construction at an active transportation hub on a tight budget.

This gives a view of the planned viaduct which will branch from the tracks along the Los Angeles River then go over Commercial Street and the 101 freeway. It makes sense to build such a project all at once. Additional platforms can be added as funding allows with run through tracks. This will also include improvements at Union Station to allow easier travel at the station for passengers transferring between travel modes. As well as making travel easier for people with mobility issues . That will be possible as more funding is available for such improvements in the future.

The California High Speed Rail Authority’s goal is to run High Speed Rail service the 171 miles between Bakersfield and Merced by 2029. Metrolink’s plan is to expand its rail passenger service with frequent, connecting services to most of Southern California in time for the 2028 Summer Olympics in Los Angeles. What we can expect is a lot of overdue rail projects being build in the next 10 years or so. For both services there has been years of stagnation with little progress or growth. 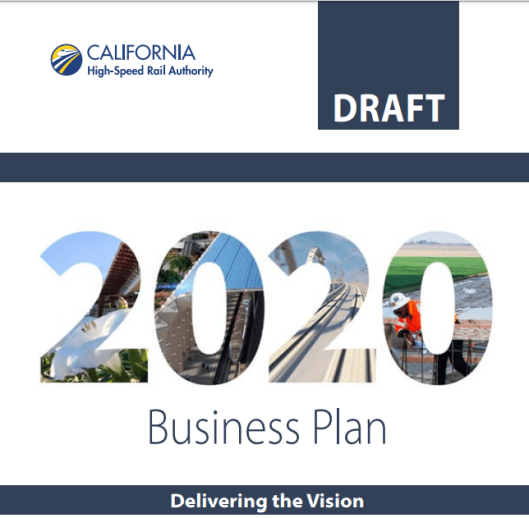 Just this Month The California High Speed Rail Authority began work on updating its Business plan for 2020. After many years of construction in the San Joaquin Valley of major structures for High Speed Rail operations are now nearing completion. The segment between Fresno and Bakersfield could be laid with rail by 2022. This will lead to using the tracks between Bakersfield and Fresno as a joint test and training track to test the new railroad and train crews.

These graphics are from the current draft of the 2020 California High Speed Rail Authority’s Business Plan.

This is the current status of Environmental  Studies for the California High Speed Rail Project. 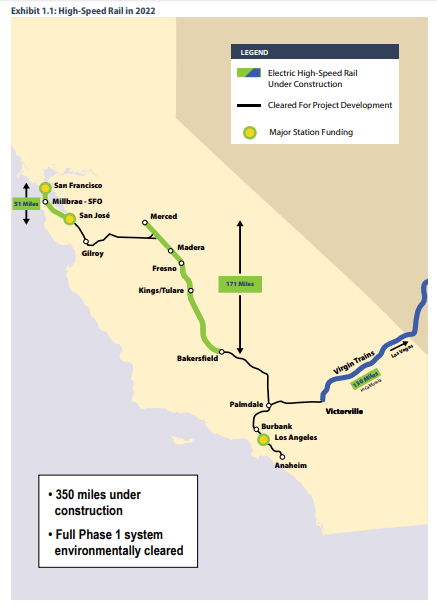 This maps shows in green and blue High Speed Track segments with electrification as part of the California High Speed Rail Project. 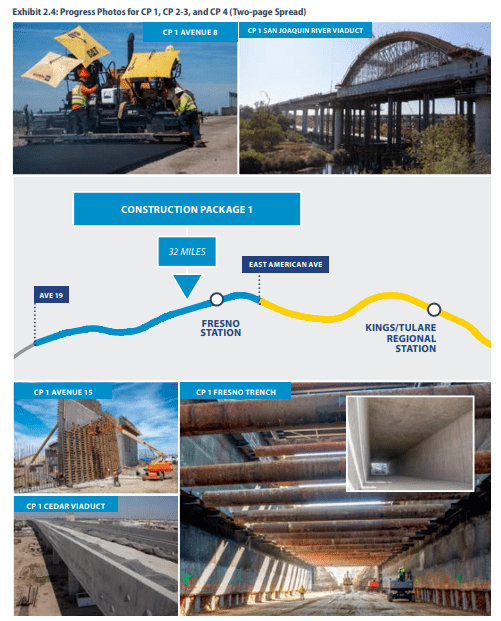 Examples of some of the major infrastructure projects being built in the San Joaquin Valley. 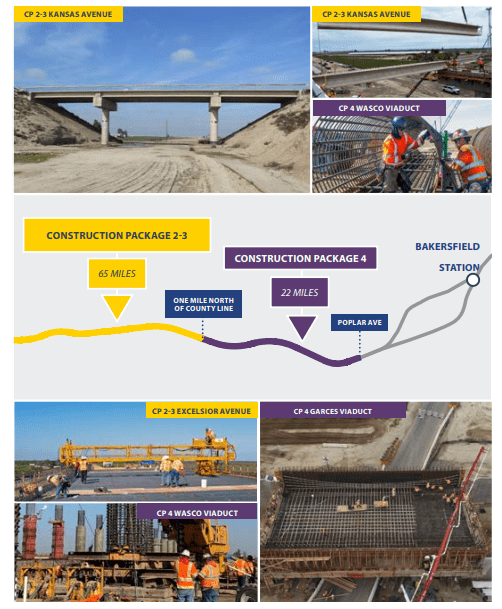 At the other end of the State is coming the roll out by Metrolink of their 10 year plan stating this year of SCORE . Construction will ramp up starting this year with the project peaking with the opening of the 2028 Summer Olympics in Los Angeles. 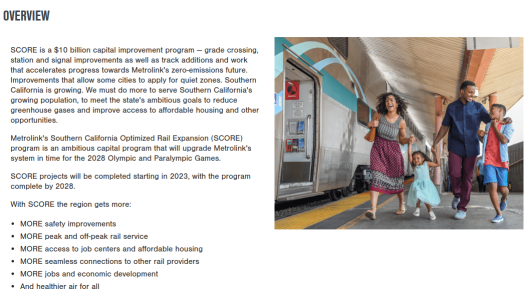 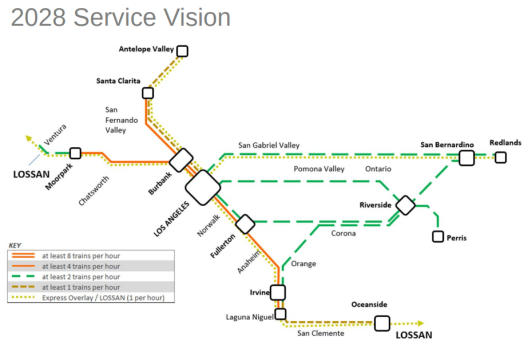 This graphic shows the level of service planned by 2028-29 for Metrolink. Check out the green dash lines between Riverside and Los Angeles along Pomona Valley. This line is the mainline of the Union Pacific in Los Angeles. Metrolink has run a few rush hour trains on this line for several years. Older SCORE maps had the caption ” service to be determined” on the UP mainline. No doubt this will require additional trackage on the UP.  Addition trackage is also planned between Fullerton and Burbank as well as between Riverside and San Bernardino to name a few. 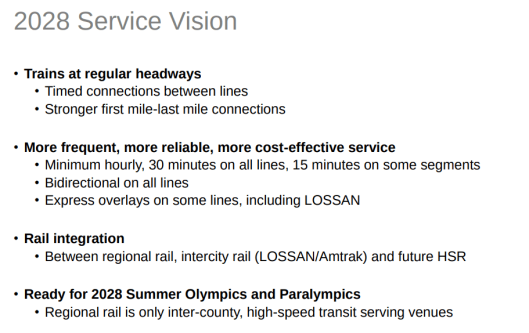 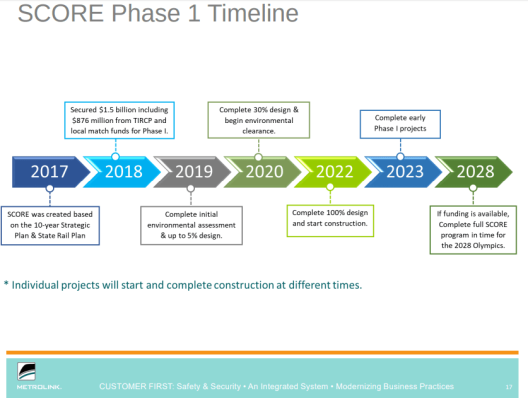 One thing is true, getting better rail passenger service takes time. Part of that is it takes time to round up the funding to buy new equipment and for new construction. And sometimes one or two problems can delay other projects. But years of proposals are finally getting ready to go into service over the next ten years or so. Here is a look of what we can expect.

A simple example of this has been the creation of 5 “Quiet Zone Grade Crossings” in Oceanside on the “Surf Line” between Los Angeles and San Diego. The City of Oceanside approved construction of these 5 upgraded crossings in February 2017. They were suppose to be in service by Spring 2019. While the construction of these upgraded grade crossings was completed months ago, trains are still blowing their horns before going through these crossings. To find out what was going on I got on line and did some research. This is what I found.

The Railroad Safety Improvements per the Plans and Specifications approved by City Council in February 2017 were completed in spring 2019.  The completed Railroad Crossing Safety Improvements were necessary for a Quiet Zone.  The Quiet Zone reduces but does not eliminate the need for the blowing of train horns; that is determined by the train engineer and NCTD policy. This summer, the City sent 60-day Notice of Establishment (NOE) the Quiet Zone to NCTD (owner), FRA and CPUC (regulatory agencies) upon the completion of the work.  The notice prompted a review of the completed improvements by the FRA and CPUC but resulted in additional improvements required by the regulatory agencies.  Given the additional work and a requirement for a second NOE, staff anticipates implementation of the Quiet Zone in February 2020.
Project Manager: Gary Kellison Retired at the end of October 2019.  The Project Management has been assigned to David Toschak,”

Well the good news is it looks like the Quiet Zones will be “Quiet” this month. But the problem had more to do with paperwork, than with construction.

Another project not far from Oceanside are plans to replace a 100 year old rail bridge over the San Juan Creek at the southeast border of San Juan Capistrano. This project has been in the works for some time, but doesn’t get a lot of media coverage. One of the problems with this bridge is a replacement bridge has to be finished before the old bridge is removed. There is also the problem that a bike path on a bank of the creek will have to be rerouted during construction of the new rail bridge and when the old bridge is removed. The Southern California Regional Rail Authority which is the proper name for Metrolink is responsible  repair and construction for this new bridge and many other rail segments used by Metrolink.

The purpose of the proposed bridge replacement project is to replace the existing single track bridge over San Juan Creek with a new single track bridge to increase safety and reduce maintenance needs by increasing the load rating and the foundation depths. The new bridge will be constructed next to the existing bridge in order to maintain service on the existing bridge until the new bridge is in place; as a result a new single track bridge over the Vereda bike path is also required. In In addition to the new San Juan Creek Bridge and bike path bridge, the following will require modifications; the siding track, a set-out track, communications and signal systems, and other support infrastructure located within the project right-of-way as required. The existing bridge will be removed and the substructure for a future second bridge across the San Juan Creek channel will be constructed.”

The Southern California Regional Rail Authority in partnership with the Orange County Transportation Authority (OCTA) is planning to replace the 100 year old railroad bridge over San Juan Creek near the southeast corner of the City’s Groundwater Recovery Plant and to the east of Descanco Park. The current bridge is in need of repair due to its age and condition. The existing bridge will remain in place until a new bridge just to the west is constructed.

During construction of the new bridge, it will be necessary to close the existing bikeway that extends east of the I-5 Freeway to the trail along San Juan Creek, which is anticipated to occur June 2022 through December 2024. To provide a continuous bikeway during construction, a detour will be installed. The detour will be begin on Avenida Padre, continue on Camino Capistrano, turn left on Del Obispo Street, enter the Trabuco Creek trail levee, and then continue south.”

Even this project will take years yet to get build with the planning and design work that needs to be done first. Just in Southern California there are other similar projects being planned and waiting for funding. Still, we’ve come a long way over the roughly 40 years of progress made in California expanding and improving rail service infrastructure.But we also have much more still to build.

The following is from the Metrolink Website with details of construction projects underway and being planned in the near future.