By Noel T. Braymer
There are improvements coming in the near future and even more later for California Rail Passenger service. This includes new equipment on order, track and station improvements now underway as well as track work which will allow more frequent and reliable service. I can’t wait to see 2022 roll around when many of these changes will be on line. To see what is planned just in Southern California I refer to this graphic from the 2018 California State Rail Plan of service levels planned by 2022. 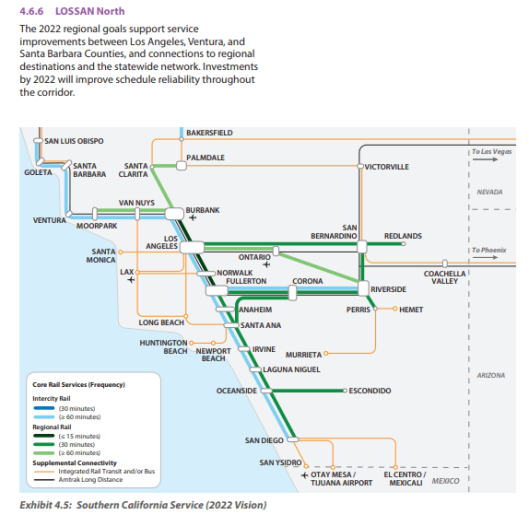 The blue line between San Diego, Santa Barbara and San Luis Obispo is the route of the Pacific Surfliner. More frequent, up to hourly service in many cases is planned for the Surfliners. Expanded Metrolink service is expected as well with more trains more often also coming in the near future. What I find most interesting are the thin light brown lines on the map for 2022. These are new connecting transit or bus routes at major train stations to places not accessible by rail service in Southern California. This map shows bus connections at Santa Clarita to Bakersfield and Las Vegas. There are planned bus services from Palmdale to Victorville, San Bernardino and out to Palm Springs and Phoenix. The bus connections that interest me the most  are the connections at Santa Ana to Huntington Beach and Long Beach. Also planned are connections to and from Van Nuys, Los Angeles and Santa Monica, as well as connections to LAX and Norwalk,

One of the reasons I am looking at this map for 2022 is I am planning a trip this month from Oceanside where I live to LAX where I will be flying out. This will mean catching the Surfliner to Union Station and then the Flyaway Bus to LAX. This allows a non stop flight from California to Dublin. But as I look at the map seen above, I wish it was 2022 now, not 2019. Along with more frequent Surfliner trains, there are plans to increase the frequency of Metrolink trains in the future between Oceanside and Los Angeles. Hourly service should be possible between Oceanside and Los Angeles which would make connections at the Norwalk Metrolink Station very convenient with connecting bus service to LAX. This would save time compared to catching bus connections at Union Station to LAX.

If the connecting bus services to train stations are running by or before 2022, this will open many more markets where a car won’t be needed on the westside of Los Angeles. This can mean more beach access via Metrolink not only now at San Clemente and Oceanside. But also to Newport Beach, Huntington Beach, Long Beach and Santa Monica. The big question for Los Angeles will be how many new transportation projects will be in service in time for the 2028 Los Angeles Summer Olympics? The almost finished Regional Connector tunnel in Downtown Los Angeles is for run through service on the Blue Line between Long Beach and Azusa as well Expo Line from Santa Monica to East Los Angeles which should be ready in a year or 2. The same is true of the almost finished Crenshaw/LAX rail line . This will include the LAX People Mover with a station stop at the Crenshaw Line station before the 2028 Olympics . Perhaps the most critical project is the extension of the Purple Line at Wilshire and Western to Westwood. If the project is on time it should be finished a year or 2 before the 2028 Olympics. One project that needs to be finished before 2028 will be the long awaited and planned run through tracks at Los Angeles Union Station. This will greatly increase the capacity of Union Station which will be needed to handle the expected crowds for the 2028  Summer games. These are the projects that should be in service in time for the Olympics. By 2028 the plan is to greatly increase service on Metrolink to serve most regions on Southern California which will be needed for the 2028 Olympics.