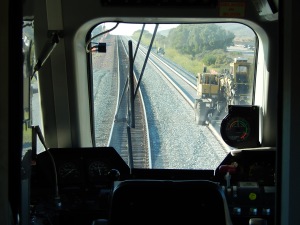 View from the train of construction of double track in Camp Pendleton. All photos by Noel T. Braymer. Click on photos to enlarge.

Almost all of the Coast Rail Line in the City of Oceanside is double tracked. Construction is planned to begin later this year for completion next year of a third track and platform at the Oceanside Transit Center. This will create a layover track for Coaster and Metrolink trains that terminate at Oceanside. This will also increase track capacity at Oceanside by freeing up the 2 main tracks at the station where one track is often used for terminated trains. 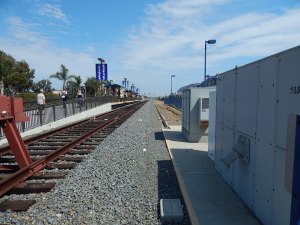 Another station project is at the Poinsettia Coaster Station in south Carlsbad. No new tracks are involved. What is planned is a pedestrian undercrossing between the platforms and a fence between the tracks to prevent people from crossing the tracks. Currently passengers have to cross both tracks at grade to get to and from the west platform to the station entrance in the east. Because of the current station layout, no trains are allowed to pass through the station while a train is loading and unloading passengers for safety reasons. By eliminating having people walk across the tracks, more trains will be able to get full use of the 2 tracks at the station when another train is stopped there. This project is planned to be finished in 2016. 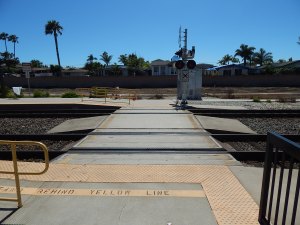 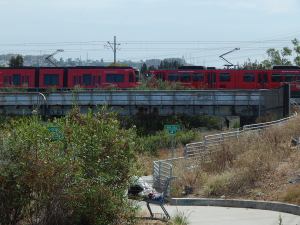 The other double track project in north San Diego built along side the Blue Line extension is between Highway 52 and Mission Bay. On the railroad this is between Elvira and Morena. This will result in 2.6 miles of new double track. There will also be straightening of the curvy segments of tracks in Elvira which will increase speeds for trains in this area. Construction of this project is planned to begin later this year and finish by summer 2018. With these 2 projects connecting to existing double tracking will create 10.3 miles of continuous double tracking in the city of San Diego. 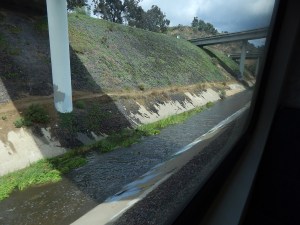 The view at Elvira  from the train in San Diego next to a creek the line was built next to. Construction near bodies of water pose problems dealing with environmental issues. Plans to build double track at Elvira go back to the 1980’s.

The biggest issue in San Diego to double tracking is the need to build new rail bridges, All of the old wooden bridges built by the ATSF are being replaced one at a time with new, concrete bridges with lower maintenance costs and built higher than the wooden bridges to be better able to survive future floods. There are many places in San Diego County where new bridges are needed over the many lagoons and wetland areas in the County.Two examples of this are first, the new rail bridge over the Batiquitos Lagoon between Carlsbad and Encinitas. With this new double tracked bridge it will be possible to extend double tracking 2.7 miles from the southern end of Carlsbad to just outside the Coaster Station in downtown Encinitas. This is planned for completion by Spring of 2019. Another Lagoon is the San Elijo Lagoon between the Cardiff by the Sea community and Solana Beach. This new double tracked bridge will add 1.5 miles of new double tracking and create over 4 miles of continuous double tracking by connecting it to existing double tracking. This project is planned to be finished by early 2018. 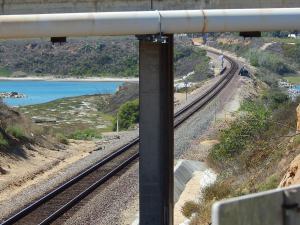 View from Encinitas of the single track and part of the Batiquitos Lagoon. 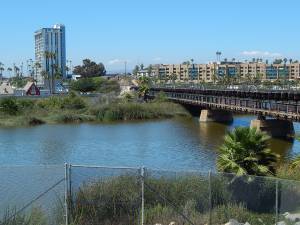